Dominating the village at an altitude of 292m, the Ramstein was built in the 13th century. The name of one of the owners, Henri de Ramstein, is mentioned for the first time in 1291.

Its existence was very brief. Having become pillagers, the Lords of Ramstein were appointed to appear before the Lord of Lichtenberg to answer for their misdemeanours. Knowing the severity of the feudal justice, they never turned up which resulted in the destruction of the castle by the Bishop of Strasbourg’s troops in 1335. It was never rebuilt.

Today, a side of a wall from the tower and several rooms carved in the rock are all that’s left. The ruins are accessible again after security work carried out in 2009 and 2010. 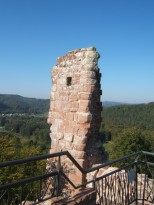 It stands proudly, at an altitude of 338m, to the south-west of the village. This castle was built in the 12th century by the Counts of Alsace.

The Lords of Lichtenberg became proprietor in 1332 and the castle underwent vast restoration.

In 1525, during the Peasants’ War, it was partially attacked. It changed hands several times and it was under the reign of Louis XIV, that Baron Montclar completely destroyed it. Some traces can still be seen, notably the square tower. Since the storm in 1999, its access is forbidden to the public.