Since 1192 our village is twinned with several German speaking communities throughout Europe, each bearing the same name “Baerenthal” (translated literally as Bear Valley). 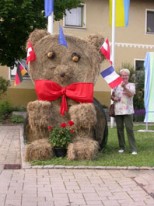 signed this convention::
“We, the communities of Europe that bear the same name “BAERENTHAL”, are making an important contribution to mutual understanding and European citizenship. Together with our fellow citizens, we announce our first social gathering, the 14th June 1992 at Bärenthal-Tuttingen, Bade Würtenberg, in Germany. We are signing a pact of friendship, an alliance and declare that in the future we shall be friends.”

Since then, every three years, a social gathering is organised in one of the six communities.
These get togethers last several days, bringing together several hundred participants. After each meeting old bonds that have been lost because of the distance separating the communities, are renewed.